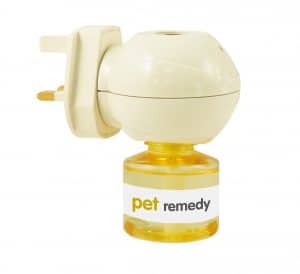 Pet Remedy is a United Kingdom based company that produces a substance claimed to help reduce stress and anxiety in all mammals and birds. If you are familiar with Adaptil products or have read any of their reviews on this blog then you will should know that Pet Remedy works in a similar way.

Unlike Adaptil, Pet Remedy doesn’t work by trying to replicate a natural Pheromone released by mother dogs to her pups. Instead, it works by activating and enhancing the production of GABA inside the animal’s brain. GABA stands for Gamma Amino Butyric Acid and is a natural chemical already inside the brain, it is scientifically proven to calm down animals when it is active and moving around the nerves.

Pet Remedy includes valerian, vetivert, basil sweet, and sage and these natural ingredients are all able to activate GABA. Valerian is sometimes known to be sedating and over-powering so instead of getting your dog stoned the diffuser releases low amounts steadily over time which can result and a lower level effect that can calm down your dog successfully during stressful times.

Based on the reviews out there it is said to work very well for calming down Dogs but just like Adaptil it is impossible to say with 100% certainty that it will work for every single dog out there. It does however have a large number of positive reviews with people claiming it has help their dogs stop chewing things out of anxiety or cowering with new guests in the house.

What one is cheaper?

What one lasts longer?

What one smells the worst?

With the Adaptil product, there are no significant odors and you won’t notice any sort of smell but with the Pet Remedy diffuser, there are claims that the Valerian produces a strong Urine like smell.

Welcome from my dog and me

I am Anton the creator of Doggoreview.com and thats my dog Jeff in the picture. I have set up this website to try make a small difference in the world. I hope my reviews will help your dog.