Since my pet dog, Jeff started suffering from Separation Anxiety last year, I have been on a mission to try and review as many natural CBD products as possible that could help him.

That first let me to Adaptil products which didn't work and then shortly after that, I managed to find CBD Oil for Dogs which as a complete game changer for Jeff by wiping out his Anxiety.

The only issue is that not all these CBD Oil vendors are honest. Some don't even have lab reports published which can be dangerous if you are not sure what is inside the CBD your Dog ingesting. The pet CBD oils may not even contain CBD Oil and instead hazardous chemicals.

Today I am going to review King Kanine CBD and see how they compare against the other Dog CBD companies; PetReleaf, Honest Paws  and Holistapet who I have already reviewed and been impressed with.

I will be looking at things like customer reviews, past history, prices and of course the most crucial thing in my opinion; the lab reports to justify if King Kanine CBD is safe for dogs and other pets. 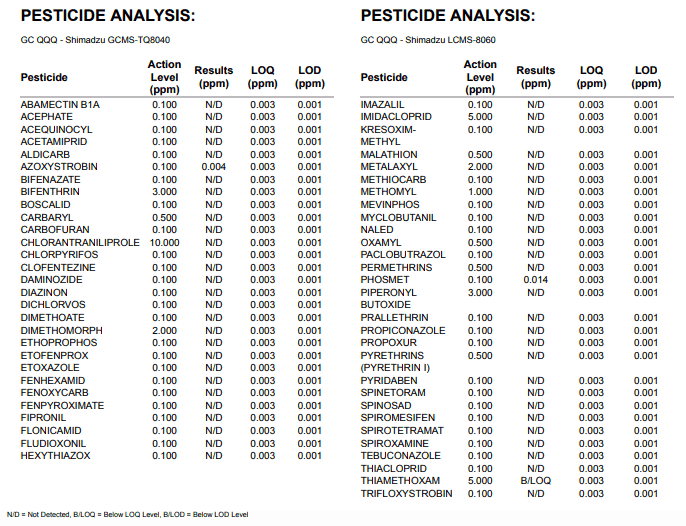 There is no way I am going to feed Jeff a King Kanine CBD Product unless I don't first see a Lab Report showing it has no THC, No Harmful bacteria and other nasty stuff companies might use to increase profit margins. King Kanine do have lab reports for all of there products.

I have taken a look at the Certificates Of Analysis for all of the products, and I feel confident enough that MOST OF THEIR calm CBD products are safe for Jeff and other dogs.

All the Certificates showed that none of the products contained Salmonella, E-Coli or Aspergillus. As well as that there was no THC found in any CBD products.

I did, however, notice that the King Kanine Blueberry Crunch contained small traces of two Pesticides.

They were Phosmet and Azoxystrobin. That is a bit disappointing since King Kanine claim that "All King Kanine items are certified organic and are free of pesticides and solvents" on their about us page.

Once again the traces of both were small, but personally, I would avoid giving the King Kalm Blueberry crunch to my own dog Jeff.
King Kanine Reviews

With some of the other CBD companies I have reviewed, customers can freely write anything they wish via a review and rate the company freely for the public to see via their Facebook page.

King Kanine has used an app on their page that gives them a lot more control of what King Kanine reviews are published.

I can't find a single King Kanine Review that is rated less than 5 stars, which is a bit strange. It's normal for a company to slip up occasionally or an agitated customer to leave less than perfect review.

That doesn't mean a company is terrible though; I like to see how a company responds to these negative reviews.

If King Kanine has indeed only ever received 5 stars and never had a single negative complaint that is wonderful, but I find it hard to believe. 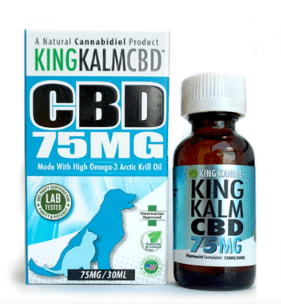 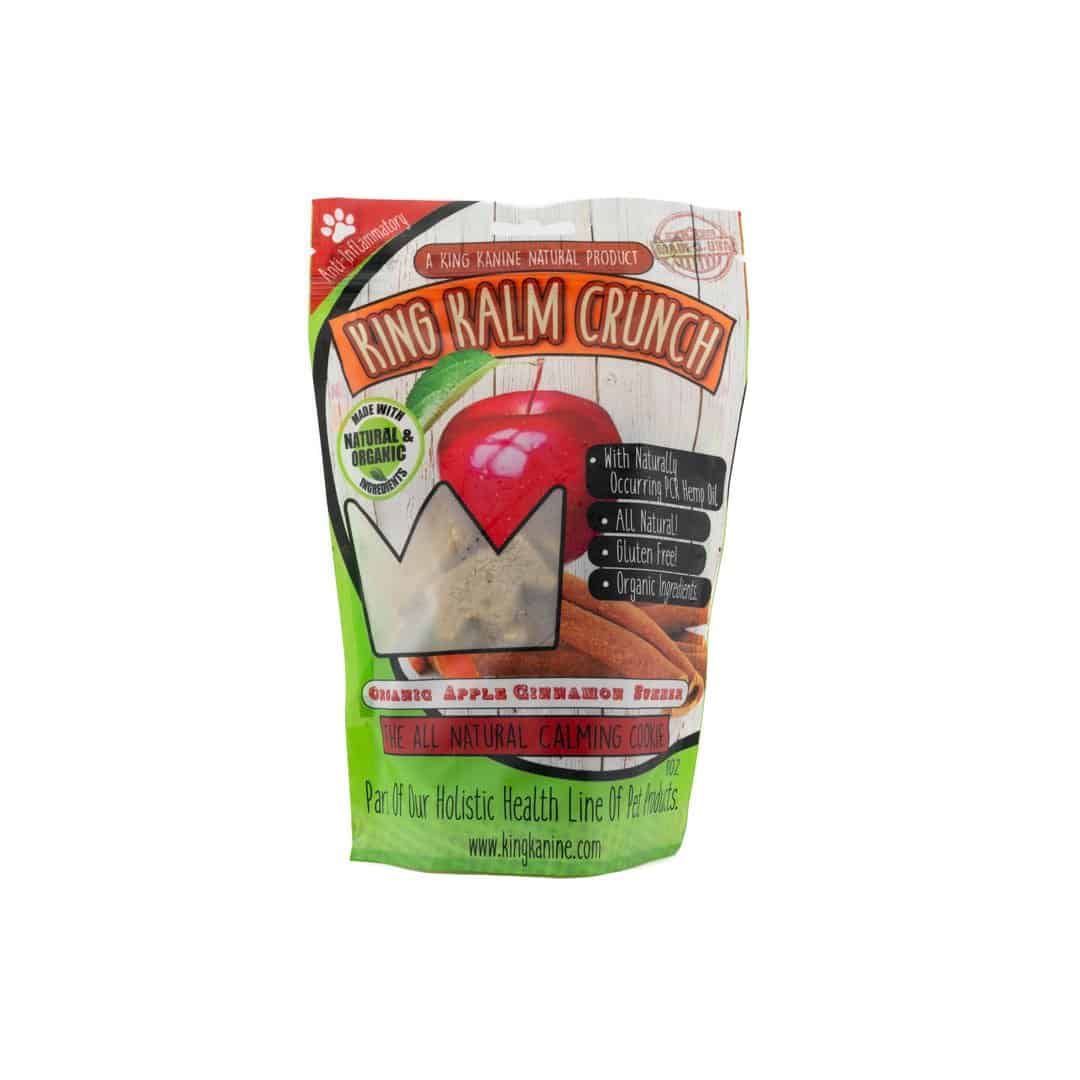 This is probably King Kanine's most popular product  which is backed up by the fact they are often sold out.

Most dog owners won't have any problems trying to get their dogs to ingest this; you might have the opposite problem.

They come in Apple Cinnamon, Blueberry and Honey flavors. Some of the reviews have credited the treats with helping with Anxiety, Arthritis pain, Diabetes and other unfortunate conditions. 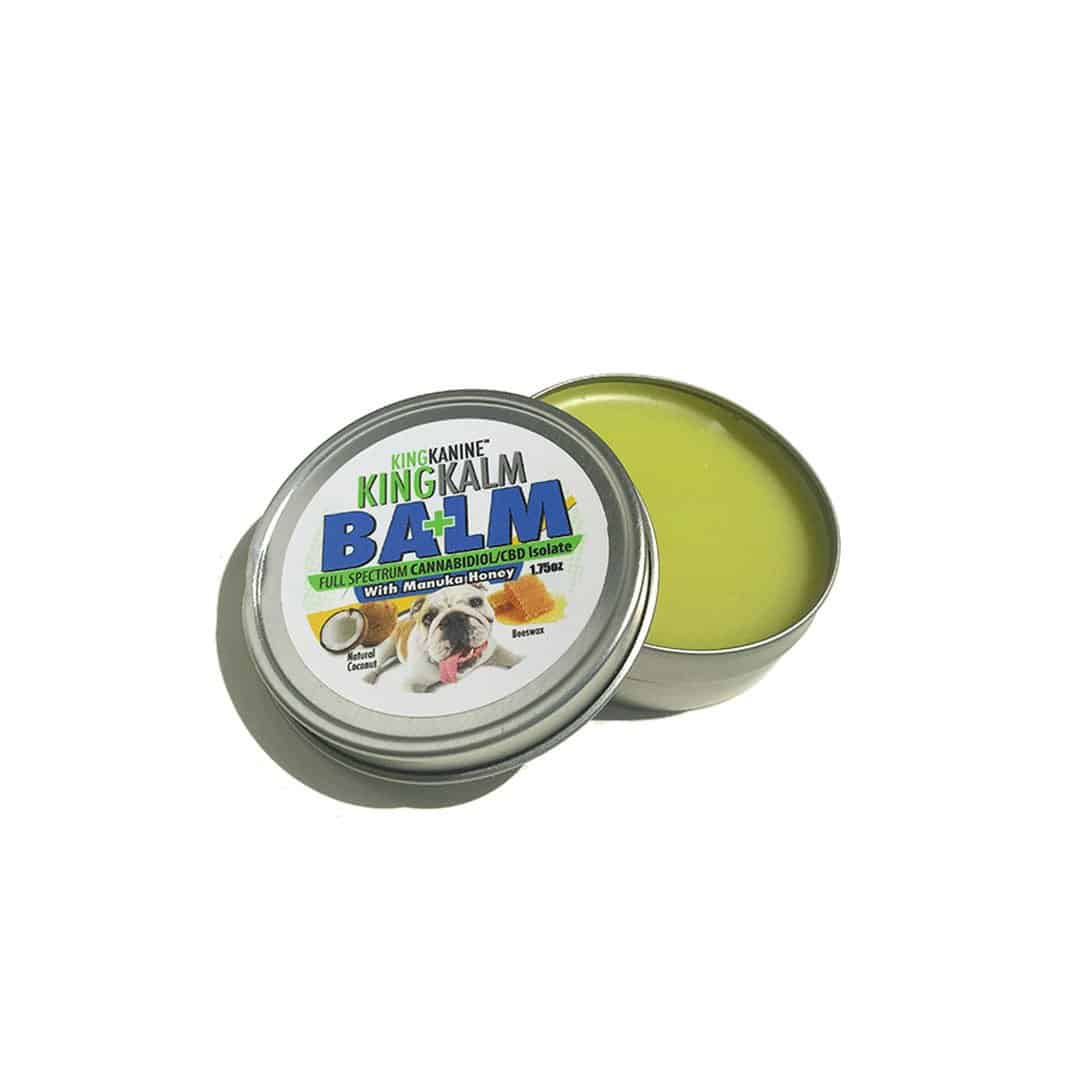 KingKanine has a couple of different CBD enriched topical's for your dog. You can put their Dog Balm on your dog's paws, nose or elbows. Some of the reviews credit the balm with helping dry skin, rashes and allergies.

If you think putting cream on your dog may be difficult, then I can relate, and the spray may be a better option for you.

The spray helps with similar things but also claims to help with inflammation.

As well as CBD OIL, both topical's have other interesting, beneficial ingredients like chamomile, aloe vera and tea tree oil. 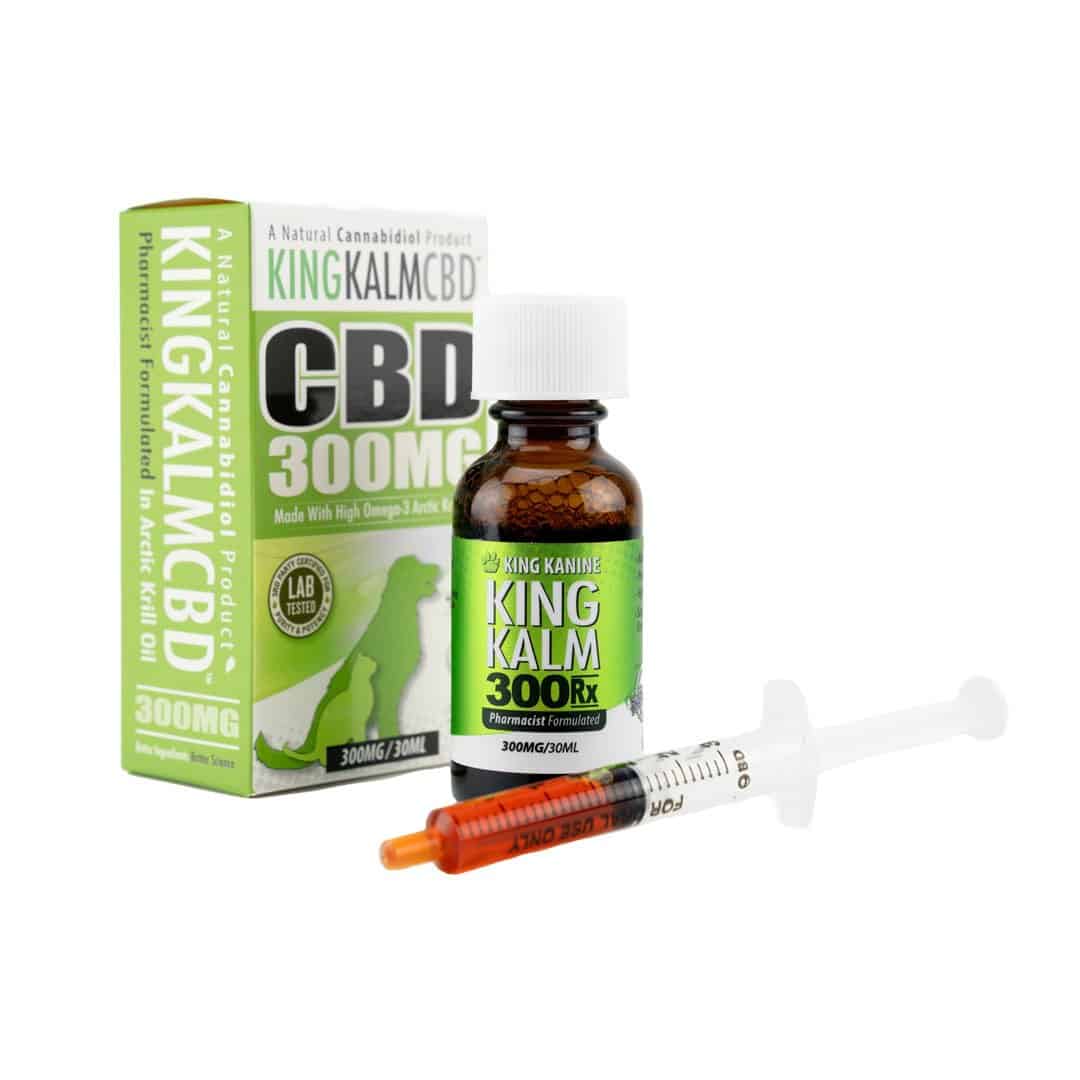 This is the CBD product I eventually ended up choosing for my pet dog, Jeff. I went with the 75mg CBD Oil  option, which at the time was on sale for $39.99, which I thought was a fair price.

It came with an oral syringe which Jeff was not happy with. He did not like the taste, so instead, I just put a couple of drops in his food, which he ate up in no time at all. 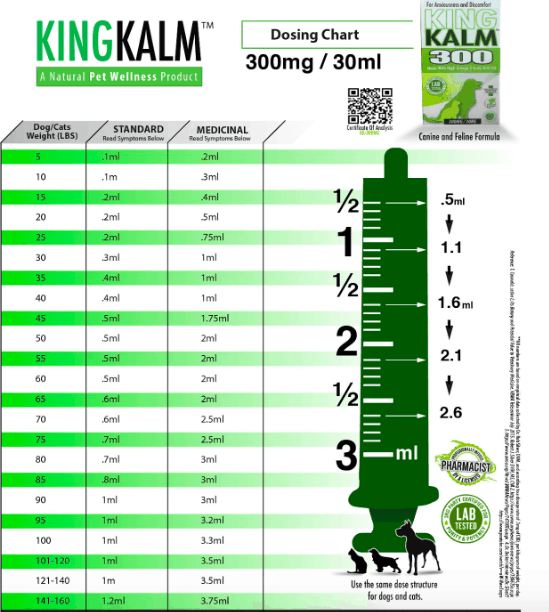 For people new to the CBD Oil for dogs world, it can be a little bit scary trying to figure out how much to give your dog., that was the case for me at least.

The good news is that it is not possible for your dog to overdose on CBD Oil. King Kanine has published a useful CBD dosage chart that should give you some ideas on where to start with your dog.

After that, it might be worth manually adjusting the CBD dosage either up or down until your dog reacting the way you hoped for.

If that all sounds too complicated then either find a CBD vendor that sells CBD capsules or CBD dog treats with reliable lab reports.

I did eventually end up ordering the King Kanine CBD Tincture for Jeff it did seem to have a calming effect with his Anxiety which backs up some of the King Kanine reviews I read.

I wouldn't say the tincture was as potent as some of the others I have bought for him in the past.

Personally, I am not going to let him try any of the CBD dog treat products after I discovered the pesticides in the Blue Berry Crunch CBD treats.

I also feel a bit weird with all of King Kanine's reviews being 5 stars. It feels a bit like they are hiding the bad CBD reviews.

There is just too many doubts with King Kanine CBD for me, I do see why people would give them 5 stars, but I would instead go with a CBD company that ticks all of my boxes. I mean, why would I not?

The Bottom Line: Should You Order From Them? 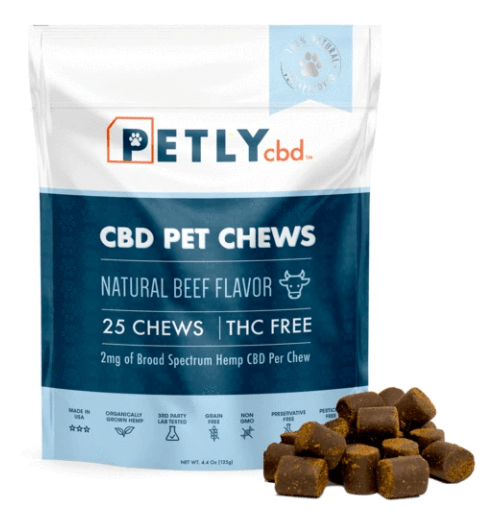 King Kanine are a well known vendor for pet owners around the world.

Their CBD products do work and I don't think they are trying to scam anyone.

Apart from the Blue Berry treats containing minuscule traces of pesticides, everything else was clean.

I would recommend PETLYCBD for all pet owners. Their CBD Oil tincture helped Jeff with his anxiety and the issues with the pesticides is just too painful for me.

For a limited time. Use the Coupon code "SHOP15" for a discount at checkout.

I am Anton the creator of Doggoreview.com and that’s my dog Jeff in the picture. I have set up this website to try to make a small difference in the world after my dog started suffering from anxiety. I hope my reviews will help your dog.

This website uses cookies to improve your experience while you navigate through the website. Out of these, the cookies that are categorized as necessary are stored on your browser as they are essential for the working of basic functionalities of the website. We also use third-party cookies that help us analyze and understand how you use this website. These cookies will be stored in your browser only with your consent. You also have the option to opt-out of these cookies. But opting out of some of these cookies may affect your browsing experience.
Necessary Always Enabled

Any cookies that may not be particularly necessary for the website to function and is used specifically to collect user personal data via analytics, ads, other embedded contents are termed as non-necessary cookies. It is mandatory to procure user consent prior to running these cookies on your website.